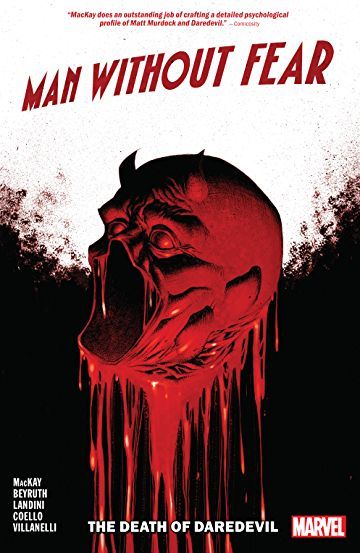 Daredevil is gone. The former Man Without Fear has succumbed to his grievous injuries suffered in the epic 'The Death of Daredevil' storyline. But Hell's Kitchen remains, and the neighborhood Daredevil defended is still a place of heroes…and villains. Now, Matt Murdock's friends, family, allies and enemies will all learn what it means to live in a world without Daredevil! Foggy Nelson, Murdock's best friend and law partner, grieves for his fallen friend - as do the many women who have loved him. Daredevil's street-level allies the Defenders step up to fill the void he left behind - while Wilson Fisk, the Kingpin and current NYC mayor, celebrates his victory. But who is the mysterious Guardian Devil sighted on the rooftops of Hell's Kitchen? Without Daredevil to protect it, has hell come for the city Matt loved? Collecting MAN WITHOUT FEAR #1-5. Rated T+