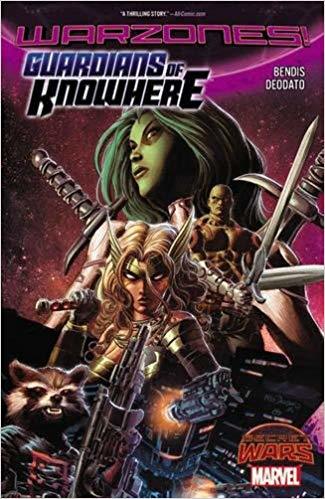 A single moon orbits Battleworld. But no, that’s no moon. It’s a space station. It’s Knowhere! The head of a dead Celestial, somehow saved from the multiversal collapse. In this colony brimming with convicts and criminals, there’s plenty of work maintaining the “peace.” But a new power is rising that threatens to tear apart the threadbare fabric of the Celestial head’s society. Will those destined to safeguard Knowhere accept that burden in time to save its citizens? Who is the mysterious woman that took out Gamora? Who stands to profit from Knowhere’s turmoil? When Knowhere’s secrets reveal themselves, it will change the face of the Guardians forever. The galaxy may be gone, but there are still places that need heroes. That need champions. That need Guardians. Collecting GUARDIANS OF KNOWHERE #1-4 and NEW AVENGERS: ILLUMINATI (2007) #3.